Are you using The Web or The Internet? 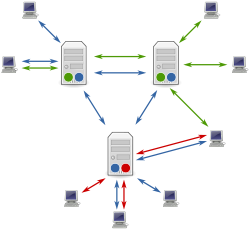 
History of The Internet
The architecture and design of the Internet was conceived in 1973. Email predates the Internet, it started in 1965 as a way for multiple users on a computer to communicate.
In 1983 the Internet proper was born when the global network switched to using TCP/IP for communications (still in place today) and the University of Wisconsin created the Domain Name System (DNS). The World Wide Web was released in 1992.
What is The Web?
The World Wide Web (WWW) is a way of accessing information across the Internet. A turning point for The Web was the release of the Mosaic web browser in 1993, making it easier for regular folk to use the web.
The Web uses the HTTP protocol to share information over the Internet. You  use your web browser (Internet Explorer, Firefox, Safari etc) to access web pages that are linked to each other via hyperlinks. Those pages may also contain text, images, video, sound etc.
Trivia
Queen Elizabeth II sent her first email in 1976.
Posted by Audrey at Sunday, January 02, 2011