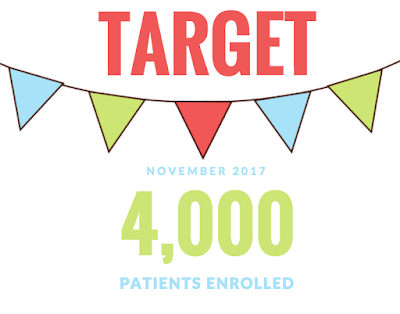 What a phenomenal achievement from everyone involved in TARGET.  Congratulations because in just 18 months 46 intensive care units in Australia and New Zealand enrolled 4,000 patients.

That's an average of 7.5 patients a day!

The busiest day was the 4th of August when 25 patients were enrolled. Crazy!

And it wasn’t just enrolling patients and following up … there were so many bags of treatment to reconcile! … and so many large boxes to manage!

Congratulations to you all.
Posted by Audrey at Friday, November 17, 2017 No comments:

We layered up our Firewall in the fight against cyber hacking

There has been a firewall protecting our clinical trial servers (and your data) ever since we put our first project in “the cloud” in 2013. In the past 5 years we have had no incidents but in our striving for excellence we have gone one step further and added another layer of protection.

In line with increasing threats and the availability of better protection, we have enhanced our firewall protection with additional layers for DDoS Mitigation, Virtual Patching, and prevention of Zero-Day Exploits. The additional firewall adds an extra level of armour to our servers (yes its a war out there!), will help protect your data and reduces the risk of downtime.
How will the firewall do all that?
In a nutshell; all traffic for our #1 server is routed through this firewall where suspicious traffic is trashed before legitimate traffic is passed on to #1 server.  In more detail it will:
On with the battle to keep your data safe!
Posted by Audrey at Tuesday, November 14, 2017 No comments: